KDKA Radio's Wendy Bell Asks If The Pandemic Is Real 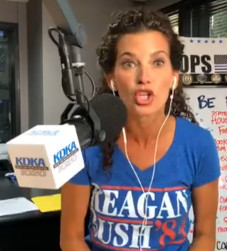 Let's start at the end of Friday's monologue Karen-rant:

Look, does a real pandemic require a complicit media pushing death numbers to scare you? Fake videos showing hospitals packed with people from foreign countries that aren't even here? Does it involve 81% false positives? Faulty virus models? Manipulated death certificates? Questionable data and censorship of anyone who questions what's really going on?

Think. Because it doesn't add up.

Did you catch what she did there? If you didn't, I'll emphasize the important word in her rhetorical question:

Look, does a real pandemic require a...?

The list of conservative scaries that follows is meant to discredit the use of the adjective "real." Here's how: Wendy Bell is saying that since a real pandemic would not require these things (a complicit media and so on) and as this one does, it follows that this is not a real pandemic.

And the purpose? Her own description gives a conspiracy-theorist answer:

They’ve finally done it. The bureaucracy’s obvious agenda to politicize this crisis and CONTOL US (sic) has finally pushed anough (sic) people over the edge and now - the usually complicit and compliant are FIGHTING BACK.

It's not a real pandemic and "the bureaucracy" is using it to control. Us.

Meanwhile in reality about 158,000 actual people have actually died from the virus in this country. Countless more are suffering real pain in hospitals and at home.

But for Wendy, it's not a real pandemic.

How is this OK with KDKA Radio?

But that's not Wendy's only covid-skepticism. She asks:

While she corrects her obvious mistake of the death rate, had she used the actual number of actual tuberculosis deaths in the US we would have seen how misleading her argument actually is.

Take a look at what the CDC reports:

If the pattern holds into 2020, we can expect that something around, perhaps just above, 500 people in the United States will die of tuberculosis this year.

Hey, Wendy! Tell us again why we don't have a tuberculosis pandemic? Had you used the correct numbers, you would have known why.

So why didn't you use the correct numbers?

Then there's this from the far from compassionate conservative:


If this virus is so dangerous, then why don't we have the homeless population dropping like flies? They can't social distance, they're not safe at home because they don't have one. They can't be socially distant. Why don't we have epidemic numbers there?

This is just plain wrong. And not even a little cruel.

But had Wendy actually done some research she might have found this from San Francisco:

When the corononavirus first hit the country, experts feared the disease would rip through homeless populations like a tsunami. Living outside in terrible sanitary conditions and with no safe place to hide, the feeling was that if COVID-19 got into even one camp there would be no way to stop it.

Those fears have fallen flat. So far.

It turns out that homeless people in San Francisco, and throughout the country, are contracting the coronavirus at about the same rate as housed people. Apparently, isolating people in hotels and thinning out shelters has helped — and for those left outside, the fresh open air is a greater protector than experts anticipated. [Emphasis added.]

But that wouldn't have fit the narrative that KDKA Radio's Angel of Death wants her listeners to believe. She doesn't want them to think the pandemic is serious. She wants them to think that "the bureaucracy" is trying to take their freedom for no real reason.

And the more they believe it, the greater the risk the virus will spread in the general population.

WHY IS THIS OK WITH KDKA RADIO?