On August 8th at the City County Building, there was a protest against Human Trafficking.

The United Nations, in 2009, defined "Human Trafficking as:

"Trafficking in persons" shall mean the recruitment, transportation, transfer, harbouring or receipt of persons, by means of the threat or use of force or other forms of coercion, of abduction, of fraud, of deception, of the abuse of power or of a position of vulnerability or of the giving or receiving of payments or benefits to achieve the consent of a person having control over another person, for the purpose of exploitation. Exploitation shall include. at a minimum, the exploitation of the prostitution of others or other forms of sexual exploitation, forced labour or services, slavery or practices similar to slavery. servitude or the removal of organs;

It's very serious and there are few crimes more heinous than trafficking in human beings.

Apart from that obvious point, why am I posting this?

Because of this, from the NYTimes:

Recently, an acquaintance posted a photo on her Instagram story showing a map of the United States, filled with bright red dots.

“This is not a map of Covid,” the caption read. “It is a map of human trafficking.”

Under the photo was a hashtag: #SaveTheChildren.

A few days later, I saw the same hashtag trending on Twitter. This time, it was being posted by followers of QAnon, the sprawling pro-Trump conspiracy theory.

The idea, in a nutshell, is to create a groundswell of concern by flooding social media with posts about human trafficking, joining parenting Facebook groups and glomming on to hashtag campaigns like #SaveTheChildren, which began as a legitimate fund-raising campaign for the Save the Children charity. Then followers can shift the conversation to baseless theories about who they believe is doing the trafficking: a cabal of nefarious elites that includes Tom Hanks, Oprah Winfrey and Pope Francis.

So why bring this up?

It's because of a few photos I saw of that August 8th Pittsburgh rally.

For example, this one: 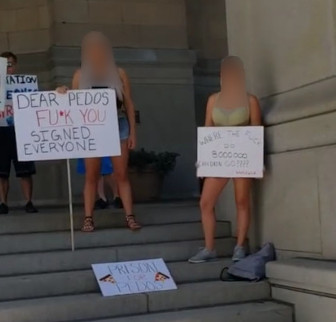 Take a look at the poster on the steps. I'll zoom in:

As you can see, it reads "Prison for Pedos" (an assertion that no one could disagree with).

But why the pizza? Why are there two slices of pizza on an anti-pedophile poster?

This is why - Pizzagate:

A detailed conspiracy theory known as "Pizzagate" holds that a pedophile ring is operating out of a Clinton-linked pizzeria called Comet Ping Pong.

This time, PizzaGate is being fueled by a younger generation that is active on TikTok, which was in its infancy four years ago, as well as on other social media platforms. The conspiracy group QAnon is also promoting PizzaGate in private Facebook groups and creating easy-to-share memes on it.

Driven by these new elements, the theory has morphed. PizzaGate no longer focuses on Mrs. Clinton and has taken on less of a political bent. Its new targets and victims are a broader assortment of powerful businesspeople, politicians and celebrities, including Mr. Bieber, Bill Gates, Ellen DeGeneres, Oprah Winfrey and Chrissy Teigen, who are lumped together as part of the global elite. For groups like QAnon, PizzaGate has become a convenient way to foment discontent.

And if you're doubting the presence of a QAnon contingent at that rally, take a look at this second poster: 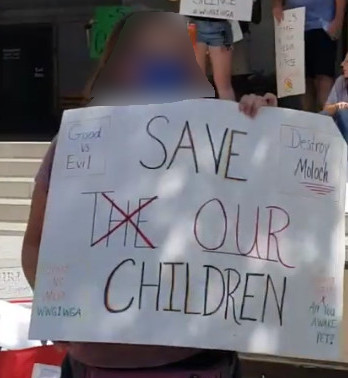 And see that bit in the lower left hand corner? 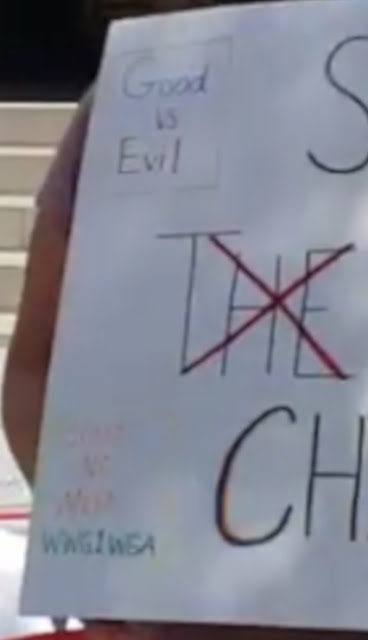 From The Daily Beast:

QAnon believers even have a slogan, “Where we go one, we go all,” which they often abbreviate to “WWG1WGA.” It’s become a rallying cry for QAnon fans that Q has attributed to President John F. Kennedy, although it actually appears to come from the 1996 action movie White Squall.

Obviously, with only two QAnon/pizzagate posters seen, I can't conclude that anyone else at that rally was a pizzagate conspiracy theorist and frankly I wouldn't be surprised if a large number of people (if not all the others) were there simply and sincerely to protest human trafficking, themselves unaware of the QAnon presence.

But there were two QAnon posters present at the anti-Human Trafficking rally. That's all I'm saying.

Back to that NYTimes piece:

Some anti-trafficking experts worried that social networks, in an attempt to clamp down on QAnon, might inadvertently hurt the legitimate organizations working to end trafficking.

Mostly, anti-trafficking activists are just incredulous that QAnon has made their cause its own.

“When I talk to my friends in the anti-trafficking movement, we’ll say, ‘Oh, it’s Pizzagate all over again,’” [Erin Williamson, the U.S. programs director for Love146, an anti-trafficking group]said. “And this time, it’s even worse.”

There's another rally scheduled for August 22.

And then another for September 5.

Will QAnon be there, too?