The federal prosecutor appointed by Attorney General William P. Barr to review whether Obama-era officials improperly requested the identities of individuals whose names were redacted in intelligence documents has completed his work without finding any substantive wrongdoing, according to people familiar with the matter.

The revelation that U.S. Attorney John Bash, who left the department last week, had concluded his review without criminal charges or any public report will rankle President Trump at a moment when he is particularly upset at the Justice Department. The department has so far declined to release the results of Bash’s work, though people familiar with his findings say they would likely disappoint conservatives who have tried to paint the “unmasking” of names — a common practice in government to help understand classified documents — as a political conspiracy.

Kerri Kupec, the Justice Department’s top spokeswoman, had first revealed Bash’s review in May, after Republican senators made public a declassified list of U.S. officials, including former vice president Joe Biden, who made requests that would ultimately reveal the name of Trump adviser Michael Flynn in intelligence documents in late 2016 and early 2017.

Perhaps someone should ask Congressman Reschenthaler about this. I mean, he did have some very strong words when the list was made public: 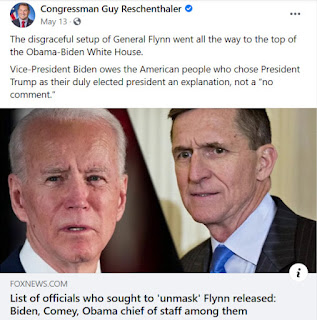 Reschenthaler called it a "setup"  that "went all the way to the top of Obama-Biden White House."

Congressman Reschenthaler owes his constituents an explanation (and perhaps an apology) for this smear.