OF COURSE, Wendy Bell Gets The Facts Wrong. Again.

This morning, Wendy Bell posted this on her FB page:

The St. Louis couple who stood with guns in front of their home this summer as a large group of demonstrators marched by has now been indicted by a grand jury for unlawful use of a weapon.
"We didn’t fire a shot," Mark McCloskey told reporters Tuesday. "People were violently protesting in front of our house and screaming death threats and threats of rape and threats of arson. Nobody gets charged but we get charged."
With the Second Amendment to the United States Constitution clearly specifying that the right of the people to keep and bear arms shall not be infringed...
Do you believe Mark and Patricia McCloskey's constitutional rights have been violated with this indictment?

Of course she gets the facts wrong. Of course she's misleading her blissfully unaware virtual congregation.
For an explanation, we'll look no further than at the local news coverage of the indictment:

The St. Louis couple who became worldwide news after waving guns at protesters outside their Central West End home last month were charged Monday with gun crimes, despite pushback against the investigation from Jefferson City to Washington.

Mark and Patricia McCloskey each face a single felony count of unlawful use of a weapon — exhibiting. Charging documents say he pointed an AR-15 rifle at protesters and she wielded a semiautomatic handgun, placing protesters in fear of injury.

If you click that link, you'll find the legal definition of "exhibiting" but if you didn't feel like clicking it, here it is:

571.030.  Unlawful use of weapons — exceptions — penalties. — 1.  A person commits the offense of unlawful use of weapons, except as otherwise provided by sections 571.101 to 571.121, if he or she knowingly...(4)  Exhibits, in the presence of one or more persons, any weapon readily capable of lethal use in an angry or threatening manner

See that, Wendy? That's something you should have checked before Karen-ranting on FB. See how it says "in an "angry or threatening manner"? See that? In real life, it looks something like this: 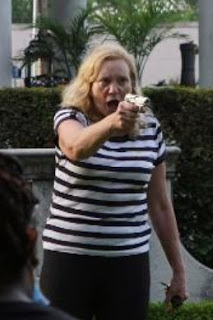 Wendy, no one is infringing on anyone's 2nd Amendment rights, ok snowflake? The DA determined that the couple exhibited their weapons in an angry and threatening manner. And that's what was against the law. The ownership of the weaponry is not in question.
You're lying to your fans. Again.
at 10/07/2020 07:45:00 AM