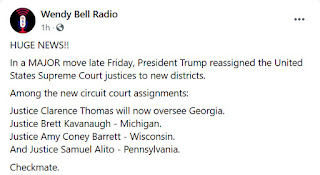 Not sure where you're going with this, Wendy.
Biden won Georgia by 12,670 votes.
Biden won Michigan by 155,629 votes.
Biden won Wisconsin by 20,608 votes.
Biden won Pennsylvania by 80,996 votes.
Are you saying that Justices Thomas, Kavanaugh et al are now going to overturn the will of the people? To disenfranchise all those votes? On what grounds? No evidence of widespread voter fraud has been presented in any court - certainly not enough to overturn the tens of thousand votes needed to give the electoral votes from those four states to Trump.
Biden won the election. President-elect Joe Biden will be taking the Oath of Office in January. Trump's concession is long over due. The longer he waits the more damage he's doing to the nation and to the GOP.
Even the CONSERVATIVE Washington Examiner says it's time for Trump to concede.
It's over. Biden won. Checkmate.

Looking back at her posting, I am not sure Wendy understands the concept of "checkmate."

Be that as it may, as you can tell from my comment I think it's safe to infer that Wendy thinks that those newly reassigned justices will do Trump's bidding and reassign those errant electoral votes to their rightful owner: Donald Trump.

Regardless of the will of the people in those states.

Also Wendy, Trump as head of the Executive Branch has no authority to make these Judicial Branch assignments. Trump didn't do it.
From 28 USC 42:

You'll note that "in vacation" means between legislative terms.
You really need get your facts straight BEFORE posting to your audience. How many of them RIGHT NOW think that Trump did this just because you said so?
Do you feel any responsibility to make sure you have your facts right?

Sadly, Wendy Bell represents a large and vocal segment of the once respectable Republican Party. I can't say I ever agreed with much of what the GOP stood for but whatever credibility it had is long gone in the face of Trumpism.