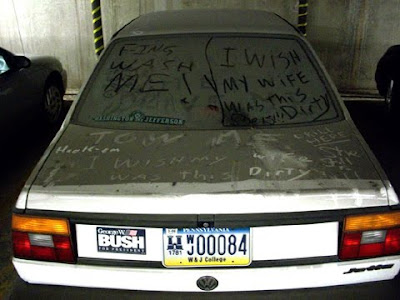 The Longworth House Office building parking garage is for current members of Congress. Former members can park there if they are not lobbyists.

So who does the above car -- which has sat abandoned for the last three years -- belong to?

According to The Daily Caller:

Bumper stickers on the car point to Hart, as does the fact that the license plate is from Pennsylvania. There’s a Washington and Jefferson College sticker (of which Hart is a 1984 graduate) on the back window. And there’s a George W. Bush for President sticker on the bumper.

A sign in the dashboard reads “109th Congress” (which lasted from 2005 to 2007 and was the last Congress Hart served in). The Pennsylvania license tag expired last year.

When a Daily Caller reporter called the Hart's office she hung up.

Typical Missy. Just like when she assumed that a black woman couldn't be a congress member and tried to order her off the exclusive elevator.

Slightly odd that they say the license plate expired last year. It's hard to see on this version, but on the larger photo attached to the original story, the tag quite clearly reads "3-08" ...

I also quite enjoy that someone clearly went to the trouble of wiping off the corner of the window to show the W&J glass-cling...