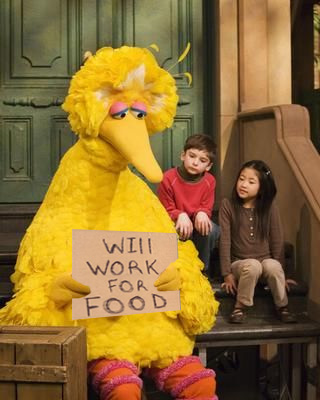 1. Romney kept his answers detail-free but full of lies. (He only got specific on his promise to off Big Bird.) From HuffPo:


Still, one issue continued to plague Romney: details. While he said he would end Obama programs, he was vague on how he would do so without eliminating a host of components he pledged to keep.

"At some point, you have to ask, is he keeping all these plans to replace [programs] secret because they're too good?" Obama said. "Families are going benefit too much from them?"

But the “Lying for the Lord” was in full force. Here's David Gergen, former presidential advisor who served during the administrations of Nixon, Ford, Reagan, and Clinton, so hardly a liberal:

PoliticusUSA on Romney's five biggest lies (in just the first half of the debate) here.

And, from TPM: Top Romney Adviser: States Will Have To Cover People With Pre-Existing Conditions Under President Romney (so, yeah, he lied about that too).

2. For those wondering when Romney would swing to the center – shake that Etch A Sketch! – the answer was October 3, 2012:


Tonight’s debate saw the return of the Mitt Romney who ran for office in Massachusetts in 1994 and 2002. He was obsessive about portraying himself as a moderate, using every possible opening or ambiguity – and, when necessary, making them up – to shove his way to the center. Why he did not attempt to restore this pose earlier, I cannot say. Maybe he can only do it in debates. Or maybe conservatives had to reach a point of absolute desperation over his prospects before they would give him the ideological space. In any case, he dodged almost every point in the right wing canon in a way that seemed to catch Obama off-guard.

3. I still can't believe that Romney's 47% comment was absent from this debate. WTF? If Lehrer wouldn't bring it up, the President should have.

4. Also absent from this debate was any women's issues. We're used to seeing few to no women as candidates or moderators, but while we're in a War On Women, it would have been nice to have some mention made of the issues and not to have women only mentioned in random anecdotes. Romney did mention at least twice that doctors and people should decide on medical treatments and not the government – oh, the irony, it burns!

Also not mentioned: LGBT issues and the environment (except in a knock by Romney at green jobs). But of course, the deficit was covered ad nauseum because it's what's important to the Villagers.

5. While President Obama was far, far too passive, Romney played the bully. Apparently he thought he was the moderator and Lehrer didn't do much to disabuse him of this notion. If you watched any of this on CNN, you saw that women did not take kindly to uber privileged Romney running roughshod all over the debate. In fact, the male/female instant tracking graph running on CNN was a visual reminder of the vast gender gap throughout the evening. 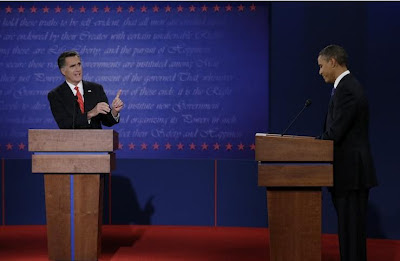 6. And finally, speaking of CNN, their snap poll at the end of the debate – the one that showed Romney won the debate 69-25 – a diarist at Daily KOS finds something entirely astonishing:


According to the breakout, all the people surveyed are white, 50+, and from the South.

Oh, yeah, why in the hell did the President say that he and Romney had similar views on Social Security?!?

Did anyone else catch the weird Mitt line bout how he isn't giving specifics because Congress doesn't like being told what to do?

I think I missed that. I know he rambled on with excuses.

Not many straws for you two to grasp..eh?

If you liked Mittens before, how can you like him now since he changed his position on everything and denied he had ever said those pre-debate things?

Not many straws to grasp at? How about a tax plan where the numbers don't add up - still. How about Romney raising the bogeyman of China holding our debt when they hold only 8% of it, and right now Treasury bonds have such a low interest rate that with inflation borrowers are essentially paying us to hold their money. How about Romney using that China bogeyman to announce that he will end the Federal government as we know it, no more education aid and support, no more money for bridges and roads, no school lunches, no unemployment compensation, no Medicaid, no more science funding, .. just defense and even that will only be paid for by the middle class and poor, since the rich will no longer pay taxes. All that while unemployment is at eight percent. But don't worry, under Romney that will change - it will go up.

Education and lunches shud be locally funded at whatever level the local taxpayers will support .... Let him... Mittens ...take us back. 1.70 gas. 4% unemp ...safety nets. Not cradle to grave Obama phone support

Ed move to Austraila Probably
Governed more to your liking .... Take ms Maria with you
Maybe you can get a group rate on emigration ...TAKE Chris rachel Ed al and the rest MSNBC... the dnc is in titanic mode. Youn's are just moving the chairs around

Mittens will take us back to a safety net????

How many jobs were being lost under Bush with his tax cuts for the 1%?

What color is the sky in your world?

Bush ...when did his term in office end?
Obh had both houses for two years ... One notable (accomplishment?) takeover of health system

Unemployment growth under O!number of food stamp users up way up ??? Doubled price of gas...rising food prices....50% recent college grads cannot find job? Some record to run and ask for another four years...quote the Donald ..."ur fired!!"

John Yoo
Some Context for the Debates
2 hours ago
I thought Mitt Romney clearly got the better of Barack Obama in last night's debate. But what also struck me was how acute Romney's need to win Congress is if he's going to follow through on his promises.
FYI: fm John Yoo
The President cannot change anyone's tax rates. The President cannot cut spending. The President cannot repeal Obamacare, though he can halt the output of regulations. President Obama, on the other hand, can live off the liberal legislation passed from 2009-2010, when Democrats delegated broad legislative powers to the executive in Obamacare and the bailouts.  Our Constitution's separation of powers places a high bar before efforts at reform, especially when it comes to uprooting flawed legislation.

"Obh had both houses for two years"

Actually, the Democrats had a filibuster-proof, super majority for a total of less than a month in those two years:

On another level govt gridlock is a good thing. It lessens involvement(screwing with) with citizens.

Just life, liberty and the PURSUIT of happiness.....no guarantees....no fairness. No spreading the wealth...no coveting your neighbors stuff ...use your 24 hours wisely...you'll not get them back... Or be a lay-a-about...your choice...

Obama and that Katrina vote

Commenter “Ken” points out something I hadn’t been aware of before: Obama was one of a small minority in the Senate who voted against the bill that waived the Stafford Act in order to make assistance funds available to the New Orleans Katrina victims without their having to match them with a 10% contribution.

See this for a list of those who voted for and against. You’ll note that Obama’s “nay” vote was one of only 14 cast against the act, almost all of them liberal Democrats. No doubt he would say he knew the act would pass and so he felt okay voting against it in order to protest the Iraq war funds that were also part of the bill. But there’s something profoundly distasteful and almost grotesque about him voting against the waiver, knowing the bill had passed despite his vote, and then lying to the audience to make them angry that the waiver hadn’t happened.

So how are with Opie and Pedoo?

Tired off to bed