Posted by Dayvoe
From the science at NOAA:

They even include a chart to show us what they mean: 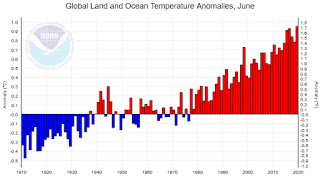 We're at the very right-most part of the chart.

The State Department’s Bureau of Intelligence and Research declined to make changes to the proposed testimony and the analyst, Rod Schoonover, an adjunct professor at Georgetown University, was ultimately allowed to speak before the House Permanent Select Committee on Intelligence on Wednesday.

But in a highly unusual move, the White House refused to approve Dr. Schoonover’s written testimony for entry into the permanent Congressional Record. The reasoning, according to a June 4 email seen by The New York Times, was that the science did not match the Trump administration’s views.


In blocking the submission of the written testimony, the White House trampled not only on the scientific integrity of the assessment but also on the analytic independence of an arm of the intelligence community. That’s why I recently resigned from the job I considered a sacred duty, and the institution I loved.

The "science" in Trumpville: not just ignorance but deplorable ignorance.