This will be short. There was another rally to bring awareness to Human Trafficking this weekend. Like the last one, it was at the City-County Building downtown. And also like the last one, QAnon was there.

Of course Human Trafficking is a very bad thing. A horror. A crime against humanity. No wiggle room on the morality of it at all. It's very very harmful.

But if there was any doubt that QAnon was there this weekend, this poster should dispel it: 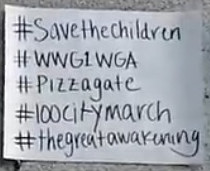 Of the five hashtags on this poster, three are clear QAnon references. We've mentioned "WWG1WGA" and "Pizzagate" previously. But the third, "The Great Awakening" is a new presence at the rallies.

So what's "the great awakening"?  From The Washington Post:

[QAnon is] a concoction of allegations against Democratic politicians, celebrities and supposed members of a “deep state” government bureaucracy, against whom Trump is seen as waging a valiant battle. Purported pedophilia rings are central to the conspiracy theory, along with Satanism and secret judicial proceedings. QAnon believers await the “Great Awakening,” or the moment the general public realizes the conspiracy exists, and the “Storm,” when thousands of wrongdoers face justice.

Which brings us to the next pair of posters at the rally: 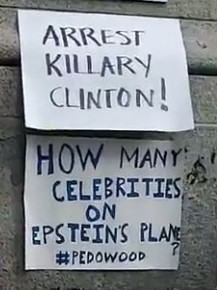 On the bottom, we see the Pedowood hashtag. We've seen it before.

But look at the top poster. While it's a bogus right-wing conspiracy theory in it's own right, what does that top poster have to do with Human Trafficking?

I mean apart from the fact that she's a Democrat and the (non-fact) that the democrats are running a non-existent sex-trafficking ring from the non-existent basement of the very real Comet Ping Pong pizza restaurant in DC. Apart from that.

Remember when that guy drove 360 miles and shot up Comet Ping Pong? He sincerely wanted to combat Human Trafficking as well. He just had some really bad "facts" in his head about where it was.

And that's the danger of injecting conspiracy theories into real-life issues.

Perhaps the organizers of the next rally (if they're not QAnon to begin with) should keep this in mind. If they are QAnon, why not just come out and say it?

Why hide behind the real suffering of those trafficked just in order to spread an immensely complicated (and completely bogus) conspiracy theory?