"Entercom is the home to thousands of voices representing Americans of all races, ethnicities, gender identity, sexual orientation, beliefs and ability.

We take very seriously our responsibility to provide a platform for our communities to engage in diverse and meaningful dialogue, debate and the right to freedom of speech, we do not condone the incitement of violence on any of our platforms.

Members of our community have recently brought to our attention comments made by Wendy Bell that do not align with Entercom’s values. Wendy has been taken off air until further notice.

Entercom Pittsburgh remains steadfast in our commitment to inclusive conversations that engage everyone in Pittsburgh while excluding any form of violence."

Then the lame stream media piled on to take away the First Amendment rights of the innocent and defenseless Wendy Bell who only wants the bring out the positive in this world-weary world.

The Trib has some details regarding her being taken off the air:

In a video recorded on June 26 during her live radio show, Bell looks into the camera and says: “My easy solution for the park rangers and hopefully snipers who are going to be watching for this is to shoot on sight.” Bell then mimics the sound of a gunshot. “Shoot! Done! No more messing with monuments. You want to mess with a monument? Done! Get out!”

Though the video was recorded over two months ago, a clip from it went viral this week.

Breadworks, a North Side-based bakery that advertised on Ms. Bell’s show on KDKA Radio, also announced on Friday via their Facebook page that it would be pulling its ads from Bell’s show due to her June 26 video, saying “we were shocked and saddened by her comments. Breadworks does not condone violence. This is why we will not be advertising on her show any longer.”

I'd love to think that this blog had something to do with the Angel Of Death being cast out of the KDKA (radio!) studios but, as far as I can tell, any mention of her COVID-denial has been absent from the coverage over her radio defenestration. And it was her COVID-denial that I wrote about.

Instead, the coverage of her firing is all about her final solution to those pesky protestors who don't like Nathan Bedford Forrest monuments. It was this: Shoot on sight! 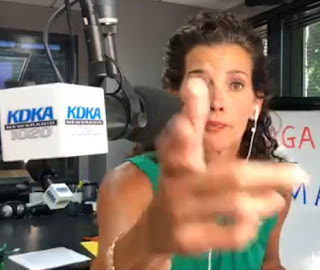 But as I wrote to Sue the other day:

I didn't spend much time with that because there's nothing to fact check. Don't get me wrong, it's a hideous idea, both politically and morally, but it's not a misstatement of fact like this:

[T]he CDC says that 94% of people who we think died of COVID did not die from COVID but died and happened to have it at the same time.

On the other hand from now on, her COVID-denial will follow her to wherever she lands (Fox News? CNS? Newsmax? World Net Daily? OAN? InfoWars?). While this might ease her transition to a conservative cloud cuckcoo land, the rest of us based in a reality-based reality, will know her for what she really is: a person who let her right-wing politics corrupt her into someone ugly, racist, and cruel.

As I quoted Wendy way back at the beginning of this story:

We're told that we need to shut down the economy. There's a cost. Everything shuts down. But to what end? Yes, every life lost is one too many. Yes that's the talking point, that's what we're going  to say -

[At this point, she's doing the sort of "blah-blah" hand gesture that usually means "this is nonsense."]

- but dollars and cents boil down to, "are you going to bankrupt America and the future for less than one percent of our population, many of whom are already ill? Or aged?"

This was when she was "on the fence" about sacrificing the ill and/or aged just for the sake of a healthy economy.