Pittsburgh's own Wendy Bell (tossed out of WTAE due to a racist FB post and more recently tossed off KDKA Radio due to her calling for statue protesters be shot on sight) is now victim-monologuing in exile from what looks to be a hugely comfortable home.

This week, she offered up for her opiated masses her analysis of the first Trump-Biden debate. You can see it here.

But back to Wendy and how she described Trump's vision. It's a side that believes in freedom and limited government. Freedoms that, she says, "generations before us fought and died to preserve and make safe."

Really Wendy? Did you miss this story? It's only a month old. Here let me quote the opening for you:

When President Donald Trump canceled a visit to the Aisne-Marne American Cemetery near Paris in 2018, he blamed rain for the last-minute decision, saying that “the helicopter couldn’t fly” and that the Secret Service wouldn’t drive him there. Neither claim was true.

Trump rejected the idea of the visit because he feared his hair would become disheveled in the rain, and because he did not believe it important to honor American war dead, according to four people with firsthand knowledge of the discussion that day. In a conversation with senior staff members on the morning of the scheduled visit, Trump said, “Why should I go to that cemetery? It’s filled with losers.” In a separate conversation on the same trip, Trump referred to the more than 1,800 marines who lost their lives at Belleau Wood as “suckers” for getting killed.

Yep. That's what Trump said, Wendy. You do know that, right?

Then she gets to a major point about Trump and the debate. Did you know that he's the victim here? Wendy, about 4 minutes in says:

Much of the talk right now is about how the men all behaved. The president, Joe Biden and the moderator, Chris Wallace. It was a disgrace. And people are jumping all over the president for interrupting and for trying to get his point in and I understand that criticism. But can you fathom being Donald Trump and having every single - [She pounds her right fist into her left palm at this point for syllabic emphasis] cotton picking media outlet disparage, distort, deceive deny, make false claims about you repeatedly? The president had no recourse but to set the record straight in the only way that he can - as a single man army. And last night you saw it on full display. [Emphasis added.]

See? Trump had no choice but to be an asshole because the mean media made him!!

She then declares publicly that she's purchased firearms - plural. Why? She explains, about 5 minutes in:

Is it because we are preparing for a civil war? No. We're preparing for if this doesn't go the right way - if Joe Biden and his extremely leftist most progressive candidate ever in American history running mate Kamala Harris somehow become president and vice-president of the United States of America - fundamentally what we know as this country is gone and lost forever. There will be no more policing. There will be no law and order. It will be madness. It will be mayhem.

Because when the angry mob knocks at your door, who's going to defend you? The police or yourself?

Uh-oh. The woman is paranoid, unhinged and armed with deadly weapons - plural.

Then she gets to her next point - how the journalism is biased. She says it's "strayed from what journalism is." Wasn't Wendy Bell once a journalist? Wasn't she fired for posting a racist FB post? So now she's an expert on journalistic ethics? I'm just asking.

By the way, this is what she looked like when she uttered the word "journalism": 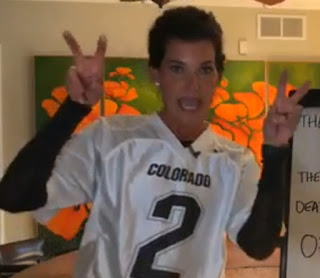 Her main complaint was about the fact-checkers and how they were wrong, just plain wrong, about her hero Donald Trump. "Garbage" is the word she used. She says it's the death of journalism except for people like her who dare to tell the truth "on platforms such as this because they have been silenced."

Can I point out that she was removed from KDKA Radio's air for advocating the shooting of statue protestors? Can I point that out now? Or should I save it for some other time?

She then rattles off some of the fact checking she finds it necessary to fact-check:

The AP - President Donald Trump unleashed a torrent of fabrications and fear-mongering in a belligerent debate with Joe Biden, at one point claiming the U.S. death toll would have been 10 times higher under the Democrat because he wanted open borders in the pandemic. Biden preached no such thing.

The Associate Press says this. Have they been asleep at the wheel? Do you not remember in March and April Joe Biden himself calling Donald Trump a xenophobe for shutting down the American borders? A xenophobe and then even doubling down and saying there was no scientific proof for making that kind of a decision?

Looks like I'll have to fact-check Wendy Bell's fact-check of a fact-check. Let's start with the fact that Donald Trump did not shut down "the American borders." Perhaps she's referring to what his many acolytes keep insist on saying, that he "banned travel from China." That's just as untrue. The proclamation that he signed in late January restricted travel of non-citizens who'd been to China in the previous 2 weeks. No ban. No "shutting down of the border." Wendy's wrong, just plain wrong, here.

And what of this "xenophobic" charge?

Biden tweeted this on a day or so after:

We are in the midst of a crisis with the coronavirus. We need to lead the way with science — not Donald Trump’s record of hysteria, xenophobia, and fear-mongering. He is the worst possible person to lead our country through a global health emergency.

CNN has this to say about it:

Given the timing of the Biden remarks, it’s not unreasonable for Trump to infer that the former vice president was talking about the travel restrictions. But Biden never took an explicit position on the restrictions until his April declaration of support.

So maybe Trump inferred it. That don't make it true, does it?

Anyway, this is what happened in April, again from CNN:

Joe Biden's campaign said Friday the former vice president supports President Donald Trump's January 31 decision to ban foreign nationals who had been in China within the previous 14 days from entering the United States.

You were saying, Wendy? You were saying that Biden said that there was "no scientific proof" for the decision? That was wrong, wasn't it, Wendy?

Then she quotes this fact-check from CNN:

The first 2020 presidential debate Tuesday night in Cleveland featured an avalanche of lies from President Donald Trump -- while Democratic presidential nominee Joe Biden was largely accurate in his statements...

Though she did omit the end of that last sentence. It reads:

...though he did make some false or misleading claims.

Interesting that she'd omit that. In any event, here's her fact-check of CNN's fact-check.

Again, in what world do you live CNN? And at what point did you sell your objectives and your righteousness to the left?

I can't fact-check this. Because there are no facts in it.

As a kinda/sorta retort to Biden saying that there's no evidence of voter fraud, Wendy proffers:

I want you to think about this. In Pennsylvania, where I am, in 2016 Donald Trump beat Hillary Clinton by 44 - just over 44,000 votes. In this Commonwealth of Pennsylvania, if we're going to talk about mail-in voting and whether or not it's trustworthy, think about this: There are 1805 post offices in Pennsylvania. That means only 25 ballots need to be corrupted, need to vanish or disappear for those 44,000 votes to go away. You don't think that's what's going on?

No, Wendy. I do not. I don't think anyone with an adequate interaction with reality does either. Is Wendy Bell actually saying that the Biden campaign/DNC/whatever has placed operatives at each of the 1805 post offices in Pennsylvania just in order to corrupt the vote??? Is that what she's trying to have her audience believe?

One last fact-check from Wendy. This one from the LA Times:

President Trump unleashed a blizzard of falsehoods Tuesday night in Cleveland...no surprise for a commander in chief who has set a new low for shading the truth and even lying in office.

To which she had no response other than to assert that American journalism is dead. I am guessing that she thinks the sentence is was self-evidently false - even though she offered up exactly no evidence to support its falseness.

On the other hand the Washington Post has been keeping track of Trump's lies and distortions.

And get some help, please.

You're armed. This worries me.